MOM Airline spoof
Although U.S. President’s claims of massive election fraud have been touted big-time on social media and websites with very little proof being provided and what proof that has been provided has been totally debunked. Thousands still take it all as gospel and blindly believe it all.

The point has been clearly made by Iceland’s WOW budget airline administrators. “WOW Air “was an Icelandic budget airline that went broke and ceased operations in March 2019. There are plans to reintroduce WOW Air soon.

As the aviation industry struggles to maintain themselves, it came as a surprise to see the "launch" of Mom Air, a soon-to-be-skyward airline (or so the website promised), connecting Iceland to both sides of the Atlantic.

The insignia looked suspiciously like that of WOW Air, , only flipped upside down to spell MOM.

The MOM insignia looked suspiciously like that of WOW Air
But it was Mom Air's other proposed policies that raised eyebrows.
​
The airline advertised that they would be charging not only for seat allocations, in-flight Wi-Fi and cabin bags -- but also toilet paper, soap and even life jackets (which is illegal).

It seemed like a hoax -- but encouraged by its more passenger-friendly policies like giving away two free tickets per flight, not demanding payment until two days before takeoff, free cancellation and cheap standby seats, potential customers flocked to its website.

Mom Air also appeared to tick socially right-on boxes, by shining a light on gender equality and vowing to employ as many women as men; and promising to "protect nature to the best of our ability" by carbon offsetting, using recycled materials and going paperless.

MOM Airline ticket
The result? Just under 10,000 Instagram followers and 6,000 booking enquiries, according to the CEO, in just two weeks -- before the airline had even announced dates and prices.

There was just one catch. Mom Air CEO Oddur Eysteinn Friðriksson, is an artist. And the project, he told CNN, was to "show exactly how obscure our reality is -- that we are talked to through marketing... and that just by setting up a website and sending out press releases, it turned our world upside down."
​
In fact, he planned to carry on the project for more than two weeks, but the attention Mom Air received became too stressful. Having been adamant that this was a real airline, both to journalists and fans in a "launch press conference," and to the lawyers representing WOW Air (which has plans to relaunch), after just 15 days, he confirmed it was an art project.
Bottom line? Don’t believe everything you read on the internet!
Source: CNN Travel 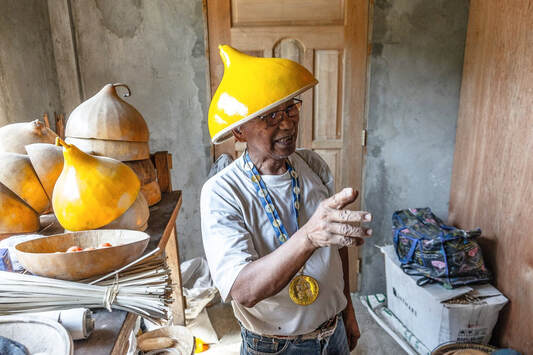 Teofilo Garcia next to a pile of hats in progress.
A Filipino may be declared a “National Living Treasure” by the National Commission on Culture and Arts (NCCA) if they display the dedication, excellence in craftsmanship and the drive to pass down an acquired indigenous craft traditions down to Filipino youth.

78 year old Teofilo Garcia, an Ilocano, from a remote mountain village in the Northern Philippines is such a person.

For centuries, the Ilocano people of Northern Luzon have donned a tabungaw hat to shelter themselves while working fields, School kids have worn them to graduations and revolutionaries have even sported them into battle. A bust of Filipino revolutionary, Diego Silang in Manila’s Rizal Park, is depicted with him wearing a tabungaw hat.
​
Teofilo Garcia has perfected the art of making these hats and he may well be the last tabungaw hat maker in the Philippines.

Tanungaw is Ilocano for “Upo” also known as Bottle Gourd or White Pumpkin. Garcia has dedicated most of his life to farming and growing “Upo” to make tabungaw hats, an art he learned from his grandfather, Hipolito, from the age of 15. He uses humble tools, designed by himself, to produce the final product that can take a week for one hat.
​Teofilo gives demonstrations and talks both locally and overseas and opens up his home to displays of his unique creations. He now introduces his own designs to compliment traditional patterns based on ideas gained from recent travels while developing unique patterns he learned as a youngster. He also gives classes to local school children in the art of tanungaw hat making.
​
Teofilo Garcia is a true National Living Treasure.

The Drainpipe of the Pacific
Thor’s Well, located 5 kilometers south of Yachats, Oregon, USA is another of the natures awe inspiring wonders.

“Spouting Horn” or “The Gate of Hell”, as it is also known, was once a sea cave beneath the rough basalt shoreline. Over many years, erosion caused the roof of the cave to collapse creating a huge sink hole.

At high tide the ocean flows over the rocks and drains into the hole causing some to call it “The Drainpipe of the Pacific” as it seems to be draining the ocean away. During low tide a totally different spectacle occurs. The water level is below the cave and the incoming waves rush into the hole, spewing violent rushes of water spray high into the air.
​
A similar phenomenon, known as “The Kiama Blowhole” exists in Kiama on East coast of Australia a couple of hours South of Sydney. However its effect has been diminished through erosion causing the hole to enlarge and the sprays not going as spectacularly high as they once did.

Unless your name is Manny Pacquiao, sporting feats on the world stage go unnoticed in the Philippines. While Manny's record speaks for itself and his is arguably one of the best boxers the world has ever seen, there have been some sporting efforts by Filipinos on the world stage that just aren't recognized. Lets look at some of them.

Rafael "Paeng" Nepomuceno (born January 30,1957) of the Philippines is a six-time world bowling champion and is acknowledged worldwide as the greatest international bowler in the history of the sport.

In recognition of his achievements, in November, 1999, at the opening ceremonies of the 1999 World Championships, Juan Antonio Samaranch who was then the president of the International Olympic Committee personally awarded Paeng with the prestigious IOC Presidents' Trophy which is the first for the sport of bowling and is the highest sports award. He is the only bowling athlete in the world who has been bestowed this award.

He has been honored by the Guinness Book of World Records four times and has three unbroken records: 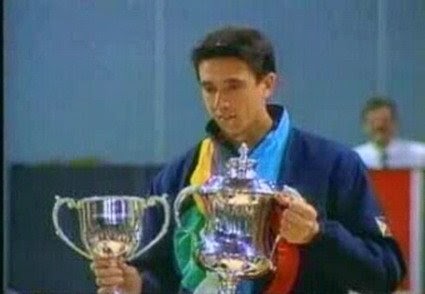 The World FIQ, the world governing body of the sport then, named Paeng as the "International Bowling Athlete of the Millennium" in behalf of 100 million bowlers during the opening ceremonies of the World Championships in Abu Dhabi, United Arab Emirates in 1999. During the ceremony, an FIQ official cited Paeng with these words: "No international bowling athlete is more deserving of recognition than Paeng. In addition to his long list of well known achievements as a world champion in three decades, Paeng truly has been and continues to be an extraordinary ambassador to the sport".
​
Paeng is the only athlete in the Philippines who has been honored by five Philippine Presidents and was given the highest award to a Filipino.

On June 25, 2011, Paeng at age 54 wins the 2011 Philippine International Open Masters for the eigth time and in the process establishes a new record for being "the oldest and youngest winner of the an International Open". He first won the Philippine Open when he was 17 years old in 1974.
Paeng has been designated by the USBC (United States Bowling Congress) as its International Bowling Ambassador for bowling and has been tasked to promote bowling around the world.
He is the first and the only one in Asia to earn a USBC Gold Level Coaching Cerification. The USBC Gold certification is he highest certification for coaches, much like a doctorate in a field of study. Paeng is one of only 25 in the world with the designation.

Paeng currently still actively competes, enjoying being able to compete against bowling athletes many who are half his age, and has the honor of still being able to represent his country at international competitions. He is also a trustee of the Philippine Bowling Federation and is an adviser to the Philippine Mens and Womens bowling team. He is also a senior lecturer professor at the University of the Philippines and teaches bowling.
Paeng truly is an ambassador for his sport and promotes bowling wherever he goes - giving clinics, exhibitions and personal appearances 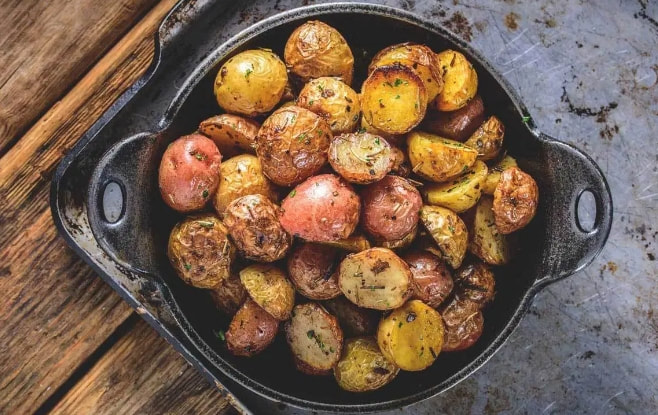 Potatoes contain a great amount of the vitamins and minerals. Peeling potatoes can significantly reduce their nutritional content
Contrary to popular belief, potatoes are actually good for you, depending on how you cook them of course.

One potato, about the size of your fist, has only 110 calories and is loaded with important nutrients like potassium, fiber, vitamin C, and complex carbohydrates. They are naturally fat free, cholesterol free, and contain no sodium. Potatoes are among the top sources of potassium.
​
Potatoes are a good source of antioxidants, including specific types, such as flavonoids, carotenoids and phenolic acids. Antioxidants help prevent certain types of chronic disease, such as heart disease, diabetes and cancer.  Test-tube studies have found that the antioxidants present in potatoes may suppress the growth of liver and colon cancer cells

The nutritional content of potatoes can vary depending on the variety and how they are prepared. For example, frying potatoes adds more calories and fat than baking them.

It’s also important to note the skin of the potatoes contains a great amount of the vitamins and minerals. Peeling potatoes can significantly reduce their nutritional content.
​
Potatoes contain a special type of starch known as resistant starch. This starch is not broken down and fully absorbed by the body. Instead, it reaches the large intestine where it becomes a source of nutrients for the beneficial bacteria in your gut. The resistant starch in potatoes may also improve digestive health.

This titanic sailboat will use wind to transport 7,000 cars
Oceanbird might look like a ship of the future, but it harks back to ancient maritime history -- because it's powered by the wind.

The transatlantic car carrier is being designed by Wallenius Marine, a Swedish shipbuilder, with support from the Swedish government and several research institutions.

With capacity for 7,000 vehicles, the 650 foot-long vessel is a similar size to conventional car carriers, but it will look radically different. The ship's hull is topped by five telescopic "wing sails," each 260 feet tall. Capable of rotating 360 degrees without touching each other, the sails can be retracted to 195 feet in order to clear bridges or withstand rough weather.

The sails, which will be made of steel and composite materials, need to be this size to generate enough propulsive power for the 35,000-ton ship.

Although "the general principles of solid wing sails is not new," designing the Oceanbird's sails has been a challenge, says Mikael Razola, a naval architect and research project manager for Oceanbird at Wallenius Marine.

That's because these are the tallest ship sails that have ever been constructed. "This ship, at the top of the mast, will be more than 100 meters (328 feet) above the water surface," says Razola. "When you move up into the sky that much, wind direction and velocity change quite a lot."
Related content

Norway pioneered electric ferries. Now it's making them self-driving
​
To better understand the atmospheric conditions at this height, Wallenius mounted sensors on top of its existing vessels, while they were crossing the Atlantic, and gathered data on wind velocity and veer (a clockwise change in wind direction), up to 650 feet above sea level. "All of this information has helped us design an efficient wing and hull system, that can make the most of the power available in the wind," says Razola.
Visitor Counter with Stats